India is truly the Land of diverse cultures and beliefs. Each state in India has its language, dialect, and cultural practices. There is a long list of festivals in India celebrated among various communities and religious groups. Some festivals are related to the state and communities while others are celebrated as per the religious beliefs.

The majority of the religious festivals of India have some interesting mythological story associated with them. These stories are passed from one generation to another so that the relevance of celebrating these festivals can be understood and the tradition is carried forward by future generations.

Each festival in India is celebrated wonderfully with a mix of lights, colors, decorations, dance, music, and mouth-watering food. All major festivals are celebrated on a grand level in India. At some of the festivals, you will find the streets full of people dancing, singing, and celebrating. 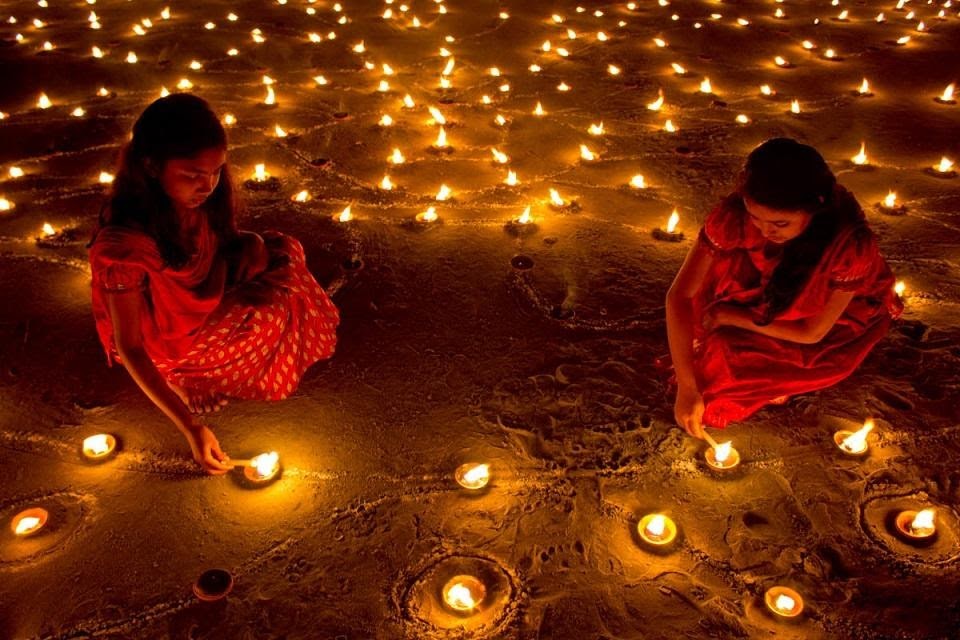 Diwali is one of the most significant religious festivals of India among the Hindu, Sikh, and Jain communities. Diwali is celebrated in the month of Kartik according to the Hindu calendar ( October or November) Diwali is the festival of lights, each year on Diwali Indians light up their houses to welcome Goddess Laxmi (Goddess of Wealth). One of the main rituals on Diwali is worshiping Goddess Laxmi.

Every year right before Diwali the people of the Hindu community clean their houses, get them painted, and do all the required renovations. On the day of Diwali people nicely decorate their houses with Diyas and candles. Mesmerizing colorful Rangolis are also made at the door to welcome the Goddess Laxmi. People wear new fancy clothing and give each other gifts.

Diwali is an important festival in India also because on the day of Diwali Lord Rama came back with his wife Sita and brother Lakshman to his kingdom Ayodhya after 14 years of exile. Lord Rama came back home after a long battle where he defeated and killed the demon king Ravana.

On the day of Diwali people also enjoy fireworks to celebrate. Some of the finest Indian dishes and sweet dishes are prepared for this festival. People also visit their family and friends to wish them and exchange gifts and sweets.

Also Read: Exhilarating Things to do in Punjab 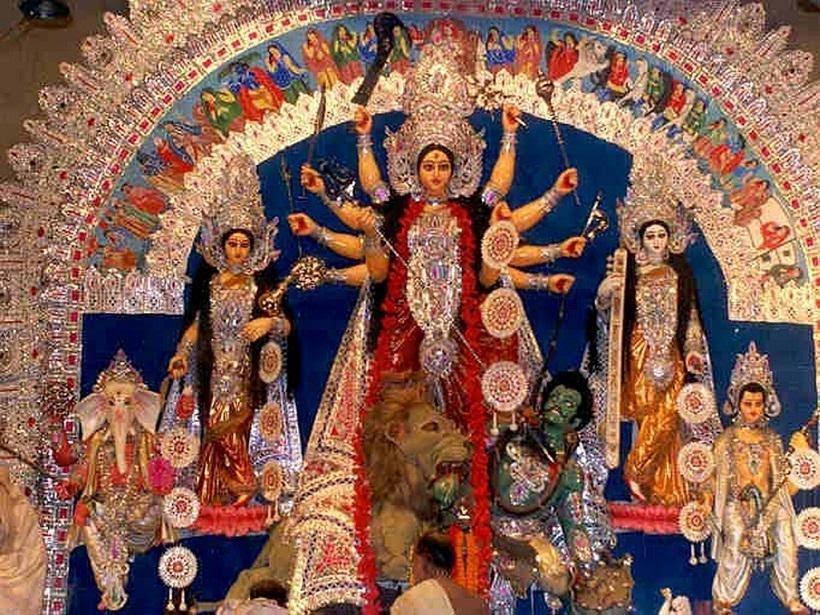 Navratri or Durga Pooja is one of the most religious festivals in India. In northern India, fasting is observed for seven to eight days during the Navratri, and fasting concluded on the eighth or ninth day. Whereas, in West Bengal, the celebrations are conducted on the grand level in Pandals (huge tents) where each night for nine consecutive nights people gather to sing, dance, and enjoy delicious sweets and savouries.

In The state of Gujarat Navratri is celebrated in its unique way. People gather in huge numbers wearing traditional Gujarati clothing for nine successive nights to perform the traditional Garbha dance on devotional songs of Goddess Durga. People are highly enthusiastic about this celebration and these can sometimes go on throughout the night. 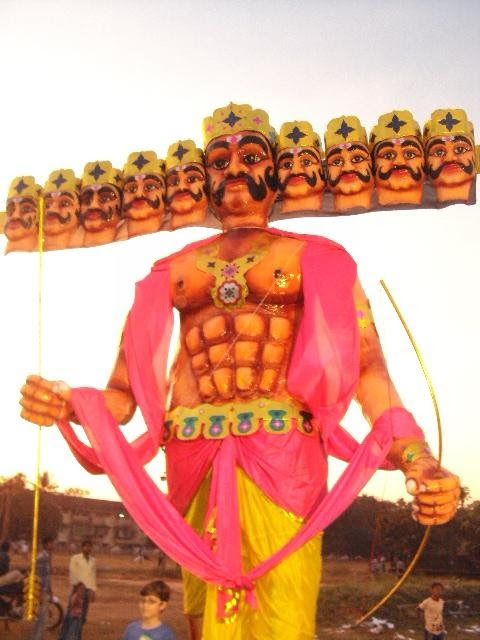 The festival of Dussehra is one of the most famous festivals of Indian states. This festival is celebrated across India among the Hindu community. Dussehra is a celebration of the victory of Lord Rama over the Deamon king Ravana. It is also interpreted as the victory of good against evil.

Dussehra is one of the most popular festivals in India and each state has a unique way of celebrating this festival. In northern parts of India, Ram Leela is conducted for nine consecutive days before this grand festival. Ram Leela is a theatre enactment of the mythological story associated with this festival is enacted by local artists. Ram Leela is conducted on both big and small levels in various communities where people come to watch this nine-day theatrical representation.

On the last day, people gather on huge grounds and massive idols of Demon Ravana, his brother Kumbhakaran and son Meghnad are set on fire followed by fireworks. While people gather to watch the Ravana burn there are also arrangements of street food and other fun activities here. People come to witness this ceremony and enjoy it here with their families.

Among all the festivals in India Dussehra is the most popular and widely celebrated. In South Indian states Dussehra is celebrated with massive parades with ornamented elephants and guards riding horses, escorting the idol of Goddess Durga all over the city.

In the state of Himachal Pradesh, Dussehra is celebrated distinctively. The city of Kullu is famous for its Dussehra celebration throughout the country.

In Kullu Dussehra is celebrated by organizing a seven-day long carnival where a massive statue of Lord Raghunath is carried on a beautifully decorated chariot and carried through the city. LargeLarge numbers of people gather from all cities of Himachal for this week-longweek-long celebration.

Also Read: Offbeat Things to do in Himachal Pradesh 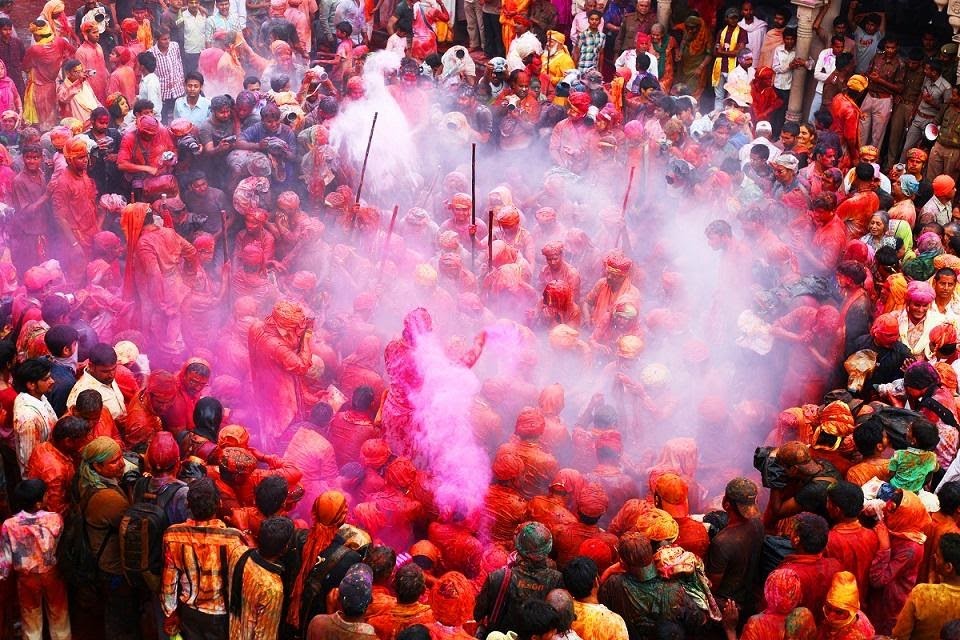 Holi is one of the best popular festivals of India. At this lovely festival family and friends gather mostly wearing white cloths to sing, dance and play with colours. Holi is played by throwing dry and wet colours on each other. On Holi special sweet known as Gujiya is prepared and enjoyed by everyone. Other special foods and drinks include Thandai, Pakora, and Dahi Bhalla.

Holi is considered to be one of the major festivals of India. Each year one day before the festival of Holi the ceremony of “Holika Dahan” is conducted by lighting bonfire. It is considered by Hindus as if they are burning Holika or the evil for good to survive. 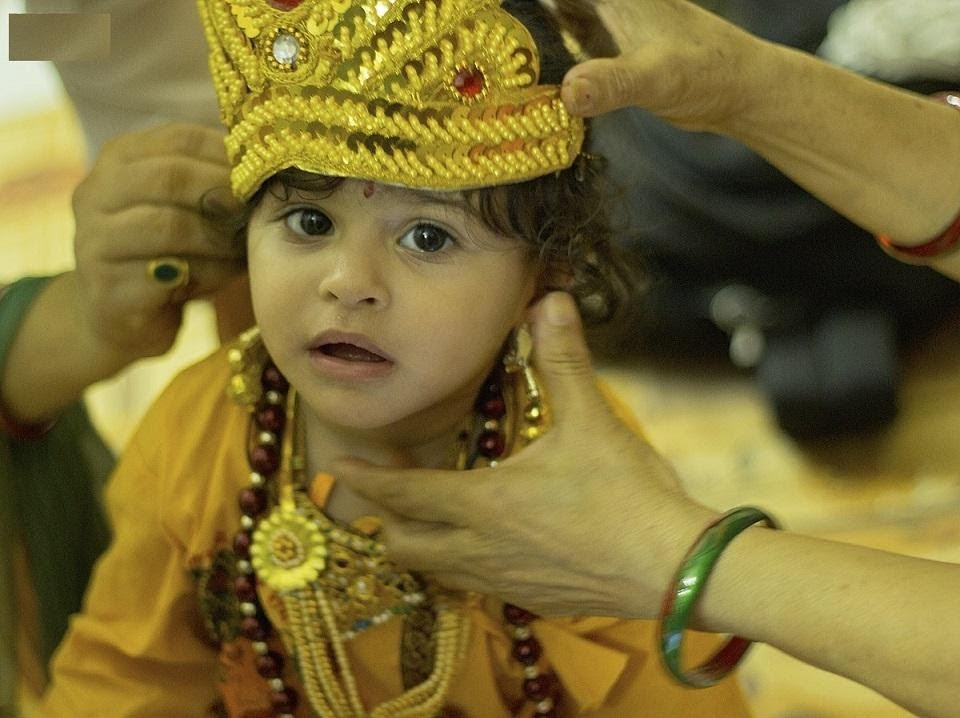 Krishna Janmashtami is a celebration of the birth of one of the most loved Hindu deity Lord Krishna. This is one of the most popular festivals in India. Lord Krishna’s birthday is celebrated in high spirits all over the country. All Krishna temples throughout the country are nicely decorated and special cultural events are organized.

As per the scriptures, Lord Krishna grew up in Mathura – Vrindavan which is considered to be the best places of Indian cultural heritage. The birth of Lord Krishna is celebrated as a grand affair in Shri Banke Bihari Temple in Vrindavan. The devotees fast all day till midnight as it is believed Lord Krishna was born at midnight.

At midnight the grand celebration begins wherein, the idol of Lord Krishna is bathed with milk and honey and dressed in new clothes after which the ceremony of Maha Abhishek is carried out. This is followed by cultural songs and classical dances at the temple. This auspicious celebration goes on for the entire night.

It is a tradition to offer 56 dishes to Lord Krishna on his birthday. This is also known as “Chappan Bhog” meaning 56 offerings. 56 different varieties of sweet and savory dishes are prepared by the devotees as offerings to Lord Krishna. 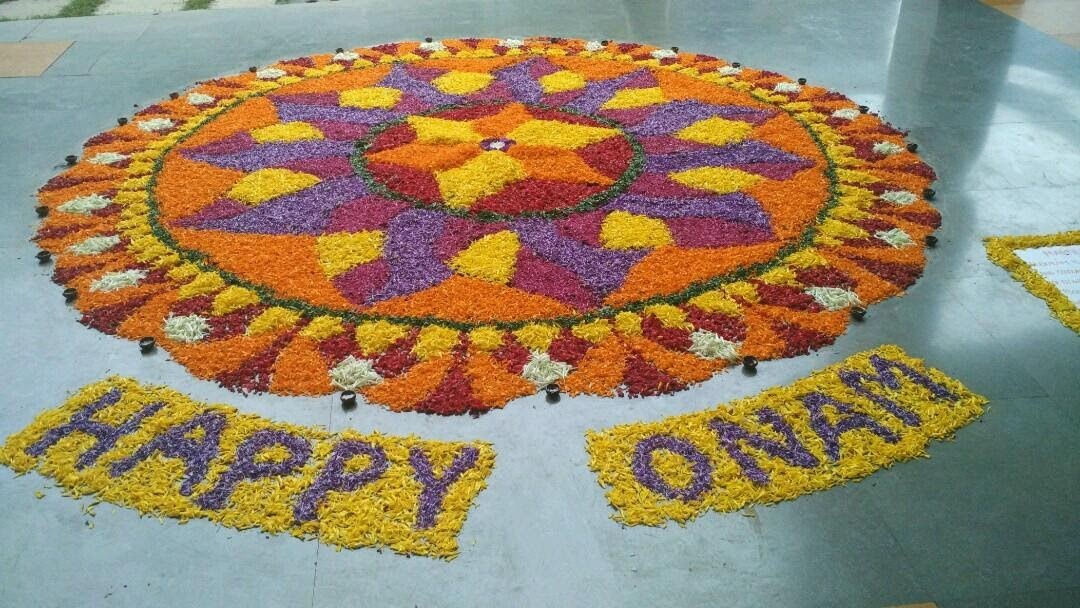 Onam is one of the famous festivals of Indian states located in the Southern part of the country. It is an important festival especially for the people of Kerala as they believe that Onam is the homecoming of the ancient Demon King “Mahabali”. Onam is celebrated for consecutive 10 days during the harvest season in Kerala.

The celebration includes carnivals on the streets, traditional dances such as “Tiger dance” and “Phulikali”, folk music and amazing fireworks. During Onam locals beautifully decorate their houses and make “Phokalam” (Rangoli made with flowers. A traditional nine-course meal is prepared and served to friends and family.

This Hindu festival also has a mythological tale attached to it. It is believed that the ancient king of Kerala Mahabali was a devotee of Lord Vishnu. He conquered the entire world and the gods too. After this, he decided to perform a grand Yagya.

To test his devotion Lord Vishnu took the form of a dwarf Vamana and asked for three steps of land to which Mahabali agreed. Once Mahabali agreed Vamana took a gigantic form and covered the earth in step, heaven in other and for the third step king Mahabali offered his head.

Mahabali’s devotion pleased lord Vishnu and he rewarded him by giving him the boon that after he is dead he could return to his land once a year. The Onam is celebrated among the locals as the return of their great king.

Also Read: Cool and Unusual Things to in India 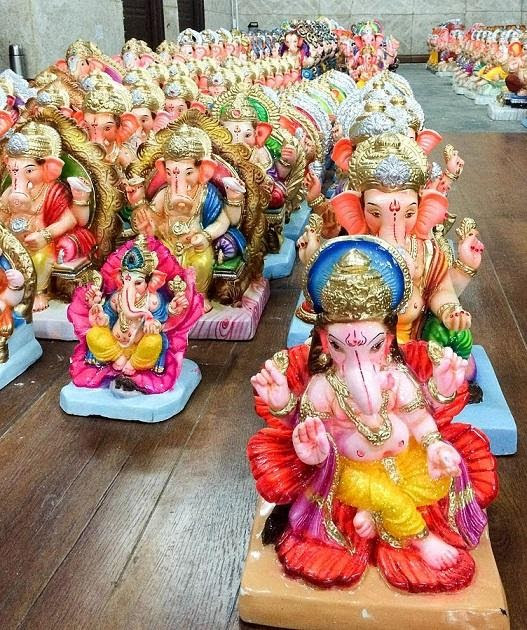 Ganesh Chaturthi is one of the most popular festivals of India. This is a 10 day-long festival to celebrate the birth of Lord Ganesha. Ganesh Chaturthi is celebrated throughout India but the state of Maharashtra is known to organize the grandest celebration on this auspicious occasion.

This is considered to be one of the most auspicious festivals in Maharashtra. Here the idol of Lord Ganesh is worshipped for ten days with a separate ritual on each day. On the tenth day, the idol is carried through the city by a huge number of people and then finally immersed in the sea.

Modak is one of the main sweet dishes that are believed to be liked by the lord Ganesh. On the occasion of Ganesh Chaturthi Modaks are prepared in each household and are served to friends and family. 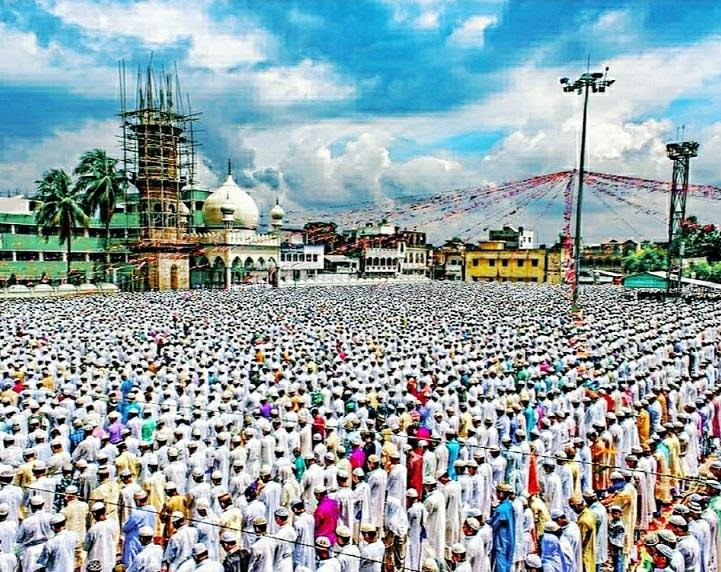 The list of festivals in India is incomplete without the mention of this important festival. Eid- Ul- Fitr is cordially celebrated among the Muslim community in India. Each year Muslims observe fasting for 30 days during the holy month of Ramadan. Eid-Ul-Fitr is celebrated after the fasting at the end of Ramadan.

Eid is celebrated for three consecutive days after the fasting is concluded. On Eid people wear new clothes and offer prayers together. During these three days, friends and family visit each other and exchange gifts. A special sweet dish “Sewaiyyan” is prepared and served to all.

As an old tradition younger members of the family receive special gifts from the elders. Donations are also made to the poor in form of money, food, and clothing. 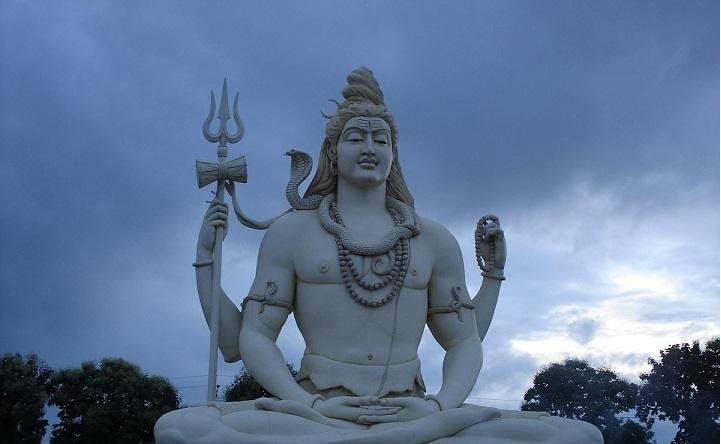 Mahashivratri is one of the most important festivals of India. It is celebrated to honor the Hindu Deity Lord Shiva. On the day of Mahashivratri, the devotees fast all day and at night the celebrations are carried out.

As per mythology, Mahashivratri is celebrated to honor the union of Shiva and Shakti. It is believed that on this day Lord Shiva married Goddess Parvathi. On this occasion temples of Lord Shiva are beautifully decorated and Shiv Lingam is worshipped.

Also Read: Best Must-visit Destinations during a Lifetime in India 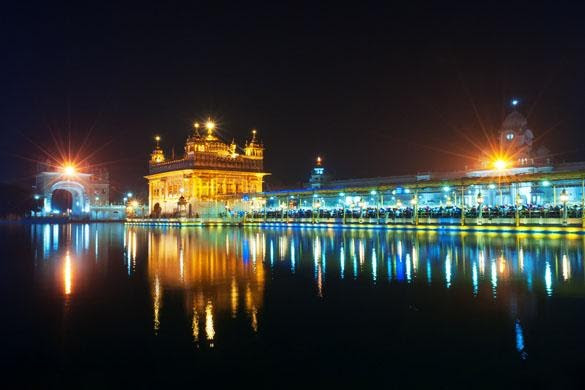 Gurpurab is a significant festival for the Sikh community in India. It is a festival for the celebration of the first Guru of Sikhism Guru Nanak Dev. On this occasion, all the Gurudwaras (Sikh Temples) throughout the country are beautifully decorated. All members of the Sikh community visit Gurudwara to offer their prayers. This is followed by the Langer (A meal that the community prepares and eats together at Gurudwara).

Gurudwara Sri Harmandir Sahib, also famously known as Golden Temple is one of the best places of Indian cultural heritage. This is one of the oldest Gurudwaras in India which holds a grand celebration on this auspicious occasion. A large number of Sikh devotees gather here to celebrate this festival.