The melting snows, blooming flora, and fauna signal the coming of spring in the Himalayas, a sign of ushering in of the season for river rafting in Himachal Pradesh. The rivers emanating from the upper Himalayan Ranges, being untamed as they are, are considered to be among the top White River Rafting circuits in the world and are known to offer a thrilling experience in this sport. The Chenab, Ravi, Sutlej and the mighty Beas, in Lahaul, Chamba, Shimla and Kullu respectively, constitute the four river rafting circuits and the best places for river rafting in Himachal Pradesh. The downstream flow of these rovers is entirely different as compared to other rivers, as stretches along these rivers become most fearsome as they foam up, lashing heavily against the underwater rocks, enroute, while swirling up along the banks as they rise and fall. You can experience river rafting adventure with our Himachal tour package

Ravi and Saal, in Chamba 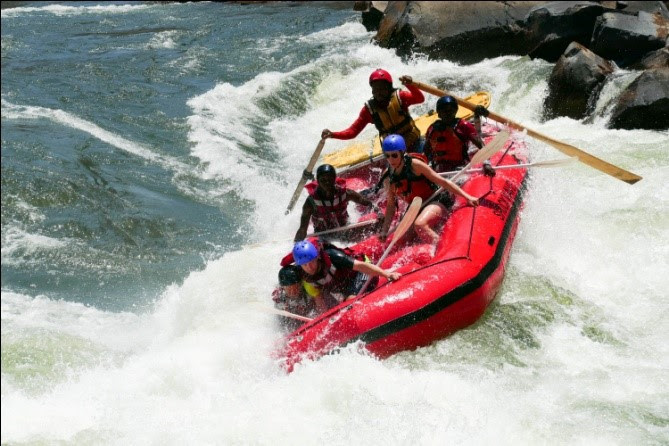 The Sutlej, flowing through here, is considered to be one among the most challenging river rafting routes when considering river rafting in Shimla in Himachal Pradesh. The stretches along which river rafting is possible covers the Tattapani stretch, it gets its name owing to the presence of hot water Sulphur springs and lies at a motorable distance of about 50 kms from Shimla.

In all there are three different stretches, along the Sutlej, demarcated according to the difficulty levels. The first one being a 3 Kms stretch at a small village Sunni, on the banks of this river. Incidentally, this also happens to be the easiest one of all and also entertaining the non- swimmers.

The next stretch goes up to Chabba, about 12 Kms offering a medium difficulty level while being more exciting than the previous one at Sunni. The rapids flowing through this stretch are Grade II and it takes roughly one and a half hours to reach Tattapani.

The starting point for the most popular rafting expedition begins at Pandowa. The first stretch in this area extends up to Pandowa from Luhri, making it a total stretch of about 20 Kms. However the untrained or the beginners are asked to stop short at Patakhra, as it is from this point onwards that the rapids turn rather rough and scaling up to  grade VI rapids here on for the remaining stretch of the course.

Pandowa to Tattapani, accounts for another stretch along the Sutlej circuit, stretching up to a length of 25 Kms, constituting of grade III and Iv rapids along its course, while the final stretch downstream measures 30 Kms from Pandowa to Kadhai Ka Fer. 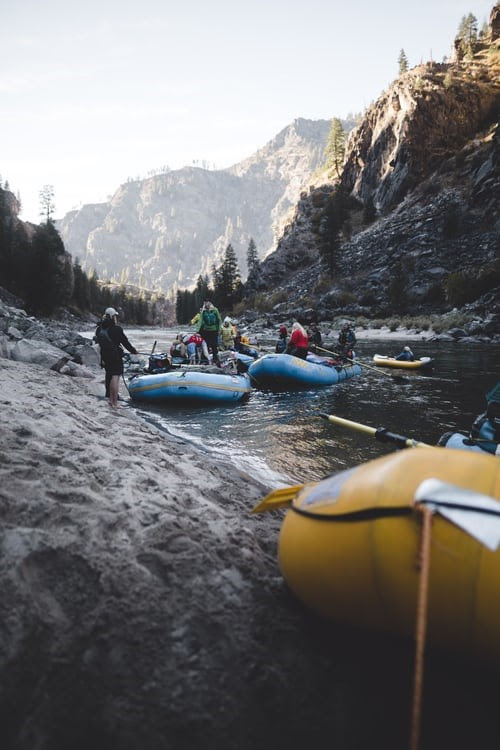 The state government and the tourism department are preparing to popularize this sport in the region by holding a river rafting carnival along the identified stretches in the Ravi flowing through the region. This carnival is intended to be split up into three categories, of Sprint, Slalom, and marathon rafting. 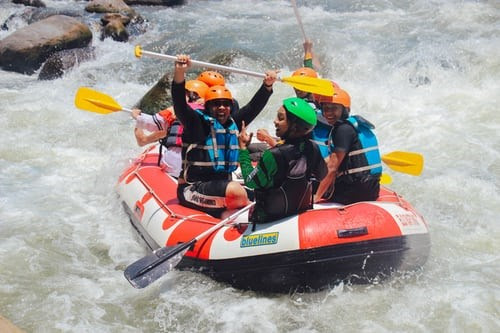 The September of 2011 is the landmark date in Lahaul and Spiti, as this is when this district was opened for water sports in the region. Gateway to Lahaul and Spiti, Koksar, is the point of initiation of river rafting in this region. A stretch of 90 Kms. from here up to Tandi, the point of confluence of the rivers Chandra and Bhaga, forming the Chandrabhaga (Chenab), entering through the Pattan Valley, is the one identified for river rafting in Lahaul & Spiti in Himachal Pradesh.

An alternative route for river rafting in Lahaul and Spiti is from Darcha to Udaipur, roughly a 70 Kms stretch along the Keylong - Leh route. 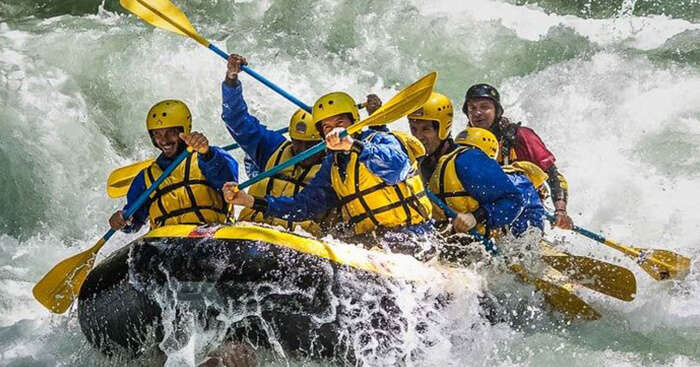 Another, most popular, river rafting circuit offering unlimited fun is the Beas river circuit in Kullu. Also termed as river rafting in Manali, the season here starts in the month of April and goes on till the end of June, just before the onset of the monsoons in this region.

The starting point on this circuit is Pirdi which is just 4 Kms ahead of Kullu. From Pirdi starts the 14 Kms stretch comprising of grade II and III rapids which are suitable enough even for the novices. Since Pirdi is roughly 45 Kms from Manali it is advised that a night halt be made at Kullu before proceeding further downstream.

The river Beas, being largely popular among the Kayaking community, with its grade V rapids upstream off Manali grade IV through Manali and grade III downstream off Manali town, it offers immense scope for river rafting, too, in the region.

Before venturing out on a rafting trip or an expedition river rafting in Himachal Pradesh, please ensure that you go through all the safety procedures as per the safety guide provided for every company. Wish you a happy and enjoyable rafting experience.

Before discussing the scope of river rafting in Himachal, first of all, we will need to understand certain terms as used in this sport before going into the details of what white water river rafting is. As the glacial or rain-fed rivers flow from their point of origin down the slopes of the mountains, they transgress varying depths all along their route. These Mountain Rivers invariably have hidden rocks that obstruct their flow causing rapids and foamy waters which are referred to as white water, and the process of navigating through these rough waters is called white water river rafting.

Sprint: Conducted in the head to head or individual format, in this, the contestants are required to complete the course adopting the best possible route.

Slalom: A set course that has to be followed by the contestants, that leads them through a set of pre-determined obstacles, around which they are expected to navigate while completing the course.

The one and only objective of this high adrenaline sport is to navigate downstream over extreme rapids using an inflatable or an inflated raft. A challenging and risky sport it requires an immense amount of dedicated team effort and is very popular around the world as an outdoor recreational sport. These races are held essentially on the natural river courses that pass through rapids or other underwater crests and troughs. In all these races the numbers of participants vary between 2 to 8 per raft, regardless of the type of the race. The set objective of the race is the successful completion of the course in the least possible time.

The popularization of river rafting, as early as in the 1950s, if not earlier, lead to the formation of an International Rafting Federation. This apex organization was later responsible for stipulating all the rules and regulations that govern this sport all over the world. World River Rafting Championships are conducted under the aegis of this federation under the various categories, as stipulated, both, for men and women.

Next, let’s try and understand the difficulty levels, as determined, for river rafting. The difficulty levels are determined on the basis of the presence of rapids, evolved, owing to sudden troughs and crests and also because of the rocks, small or large, lurking in the waters.

The grading system for Rapids

Grading or the levels of difficulty and danger are determined as per the international scale from I to VI on a progressive basis. The factors according to which the levels are decided are remoteness, size and type of waves, nature of river (whether there exist continuous rapids or there are calms between successive rapids) and water temperature, geographical terrain etc. while the overall grading is dependent on the hardest or the toughest rapid on the concerned river.

Class I: Comprising of small waves/ripples, and fast-flowing water.

Class V: This class is considered to be extremely difficult and will need to be carried out by an experienced team and under experienced guidance, as it could result in the loss of limb or life

Class VI: Not negotiable and life-threatening or suicidal.

Classes I to III require you to poses basic to mediocre swimming skills, whereas reasonably to very good white water rafting skills are required for classes IV to VI.

Although being risky, and at times leading to fatalities, this sport can also be an extremely enjoyable, safe, and exciting soft adventure sport under proper professional guidance and your adherence to the safety tips, as advised by your instructor. The right training and use of the appropriate equipment while following the laid down international safety norms, also result in ensuring this sport to be an outdoor pleasure sport. Moreover, the popularity of this sport can also be attributed to the fact that even nonswimmers, without any prior experience, can go river rafting, not only that but also the fact that just a 15-minute instruction can enable you to enjoy this amazing and challenging sport.

The rivers emanating from the mighty Himalayas, be they the glacial or the rain-fed rivers, their compatibility for rafting is determined after making the descents along their course of flow. With this in view river exploration came of age in India, after the local river runners had logged optimum experience qualifying them to join river rafting expeditions, coupled with the first descents of the Sutlej from the Rampur to Tattapani section, Teesta in Sikkim and West Bengal, and the Sarda in the Kumaon Himalayas in 1985, 1986 and 1987 respectively. Although many rivers in India are yet to be explored, the ones already chartered are basically just the proverbial “tip of the iceberg”. According to Peter Knowles, Chairman of the British Canoe Union Expeditions committee, the scope for first descents of rivers in India is immense, when compared to any other Himalayan country. The rivers in the northeastern and the southern states of India too have tremendous scope for river exploration.

India is fast emerging as the next river–running destination in the world. Moreover, the fact that most or in fact all the rivers in India being easily accessible and no permits are required for river running except on the “inner line” or the areas close to international borders, river rafting is well on its way to becoming the most popular adventure sport in the country. Owing to the commercialization of this sport in India we see that there, currently, are more than 50 commercial outfitters in India, who organize such rafting trips that range from 2-hour trips to conducting various multiple-day expeditions.

Presently this sport has mainly been concentrated along the Ganges in the Rishikesh – Devprayag section. The other rivers of the area, like the Alaknanda, Mandakini, and the Bhagirathi too are on the tourist map and are being considered for such adventure sports activities including Kayaking. Various other rivers in Uttarakhand like the Ramganga, Bhilangna, Yamina, etc. have all been surveyed and found appropriate for conduction of rafting and other related water sports. The River network in Jammu & Kashmir, and the Ladakh region to have tremendous potential for this sport. Talking of adventure sports in Himachal Pradesh, this state happens to be a year-round river–running destination. Although most of the rivers down south are yet to be explored regarding the possibility for the conduction of river – running, a few sections of the river Kaveri have been found compatible for this sport.

This article is originally published in Tikkustravelthon